Celebrate the start of pumpkin season with these yummy Pumpkin Snickerdoodle Cookies! 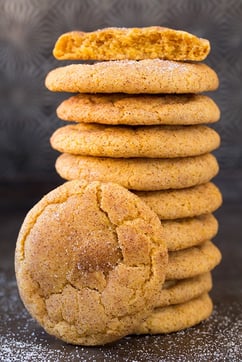 
2. In the bowl of an electric stand mixer fitted with the paddle attachment, cream together butter, granulated sugar and brown sugar (not until pale and fluffy, just to combined.
3. Occasionally scrape down sides and bottom of bowl throughout entire mixing process if not using a paddle attachment that constantly scrapes bowl while mixing). Mix in egg yolk, then mix in pumpkin and vanilla extract. With mixer set on low speed, slowly add in dry ingredients then mix until combined.

4. Divide dough in half and place each half in a bowl, cover with plastic wrap and chill 45 minutes to 1 hour (dough should be slightly sticky so the cinnamon sugar will stick when rolling but they should be manageable to roll in the palms of your hands).
5. Preheat oven to 350 degrees during last 10 minutes of refrigeration.


7. Scoop dough out 2 even tablespoons at a time (run the measuring spoon against side and edge of bowl so it will slightly deflate the dough while also giving an equal tbsp, twice per ball) and shape into a ball, roll dough ball in cinnamon sugar mixture to evenly coat then transfer to Silpat or parchment paper lined baking sheets spacing cookies 2-inches apart.


8. Bake in preheated oven 12 - 14 minutes (they should look just slightly under-baked as they'll cook slightly once removed from oven). Cool on baking sheet about 5 minutes then transfer to a wire rack to cool completely.

When he founded Blue Marsh, Tom Davenport wanted to create a different kind of insurance company. One that’s built on personal relationships and a local presence. One where you, the customer, feel more like a friend.

As an independent insurance agency, Blue Marsh Insurance represents a carefully selected group of financially strong, reputable insurance companies. Therefore, we are able to offer you the best coverage at the most competitive price.

If you’re interested in starting a quote online or having us take a look at your current policies, click here!

Ready to start your quotes?

We make the process super easy. When you're ready, click the button below to see how we can help you!

Have a great experience?

Online reviews help our agency tremendously. If you've had a great experience, we'd love your review!

Connect with us on social